These principles and rules also apply to British people who work or live in Belgium. The way in which the social security scheme will subsequently operate will be determined in the agreement  concluded between the European Union and the United Kingdom.

BREXIT  took place on 31 January 2020. This means that the Withdrawal Agreement has been  approved by both parties (the UK and the EU) and that we are now in a transition period that will remain in force until 31 December 2020.

12/12/2019: UK elections: As the UK Parliament did not approve the version of the Withdrawal agreement agreed by Boris Johnson with the EU, Boris Johnson asks for new elections. He hoped for a positive result in order to get his deal through the British Parliament.

01/02/2020: BREXIT: The UK is leaving the EU. The transition period then begins. During the transitional period, the UK remains subject to all EU rules. This applies both to EU citizens in the UK and British nationals in the EU.

What does the FPS Social Security do?

Belgium is one of the European states most exposed to the consequences of Brexit. In the absence of an agreement or accompanying measures, this would probably have many negative consequences for the social rights of many Belgian or British policyholders, who have hitherto been protected by European legislation.

The FPS Social Security coordinates and supports the preparations for Brexit for all public social security actors, so that they all have the necessary instruments at their disposal to limit the negative consequences of Brexit as much as possible.  The preparations for Brexit are highly variable, uncertain and complex.  In order to manage these circumstances as well as possible, the FPS has preferred a flexible approach, which promotes continuous consultation with all stakeholders.

Statistics on Belgians in the UK

They too are individually affected by BREXIT.  Here below is a demonstration using these few figures. 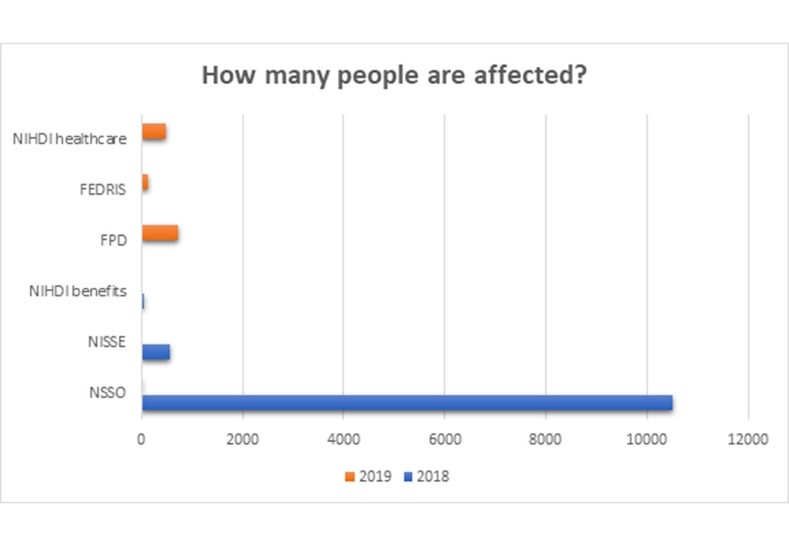 The NSSO delivers A1 documents.  The A1 form is a document to be applied for in case of secondment or simultaneous employment in several Member States within the EEA. Here we make the difference between pure secondment (based on article 12 of Regulation 883/2004) and simultaneous employment on several territories (based on article 13 of Regulation 883/2004).

The figures from the NSSO only relate to employees who are subject to the Belgian social security system. Residents of Belgium who are subject to another social security system are not included in these figures. Residents of Belgium who work exclusively in the UK for an indefinite period of time and are subject to article 11.3.a in the UK are also not included in the above statistics. The actual number of people affected is therefore likely to be higher than the 2018 reference figure of 10,513.

The National Institute for Health and Disability Insurance: benefits

The NIHDI's figures refer only to persons of Belgian nationality resident in the UK. 35 is the total number of Belgians in the UK who received a benefit in 2018. Of these, 22 are for invalidity, 9 for maternity leave  and finally 4 for birth/paternity leave.

The National Institute for Health and Disability Insurance: healthcare

On 30 June 2019 there were 484 Belgians living in the UK (394 holders and 90 dependent family members) needing health care. It is important to note that these are only people who live in the UK, we do not yet have any figures on tourists (tourists here are people who have lived in the UK for less than three months).

Do you have any questions? You can reach us by e-mail: international@minsoc.fed.be (link sends e-mail)

For more information on the consequences of Brexit: https://socialsecurity.be/citizen/nl/brexit